No Result
View All Result


A strike launched from Gaza killed two Thai workers in southern Israel on Tuesday, police said, hours after Israeli airstrikes toppled a six-story building in the Palestinian territory that housed bookstores and educational centers. With the war showing no sign of abating, Palestinians across the region went on a general strike in a rare collective action against Israel’s policies.

Violence erupted at protests in the occupied West Bank, including at one in the city of Ramallah. Hundreds of Palestinians burned tires and hurled stones toward an Israeli military checkpoint. Troops fired tear gas canisters at the crowd and protesters picked up some of them and threw them back.

One protester was killed and more than 70 others wounded — including 16 by live fire — in clashes with Israeli troops in Ramallah, Bethlehem, Hebron and other cities, according to the Palestinian Health Ministry. The Israeli army said two soldiers were wounded by gunshots to the leg.

A top view shows the remains of a six-story building which was destroyed by an early morning Israeli airstrike, in Gaza City, on Tuesday. (AP)

The general strike was an uncommon show of unity among Palestinian citizens of Israel, who make up 20% of its population, and those in the territories Israel seized in 1967 that the Palestinians have long sought for a future state. It threatened to further widen the conflict after a spasm of communal violence in Israel and protests across the West Bank last week.

Muhammad Barakeh, one of the organizers of the strike, said Palestinians are expressing a “collective position” against Israel’s “aggression” in Gaza and Jerusalem, as well as the “brutal repression” by police across Israel. Israel blames the war on Hamas and accuses it of inciting violence across the region.

Since the fighting began last week between Israel and Gaza’s Hamas rulers, the Israeli military has launched hundreds of airstrikes it says are targeting Hamas’ militant infrastructure, while Palestinian militants have fired more than 3,400 rockets from civilian areas in Gaza at civilian targets in Israel.

The latest attack from Gaza hit a packaging plant in a region bordering the territory. In addition to the two people killed, who were in their 30s, Israel’s Magen David Adom rescue service said it transported another seven wounded to the hospital. Thai Foreign Ministry spokesman Tanee Sangrat said the wounded were also Thai.

The Israeli military said militants also fired rockets at the Erez pedestrian crossing and at the Kerem Shalom crossing, where humanitarian aid was being brought into Gaza, forcing both to close. It said a soldier was lightly wounded in the attack on Erez. 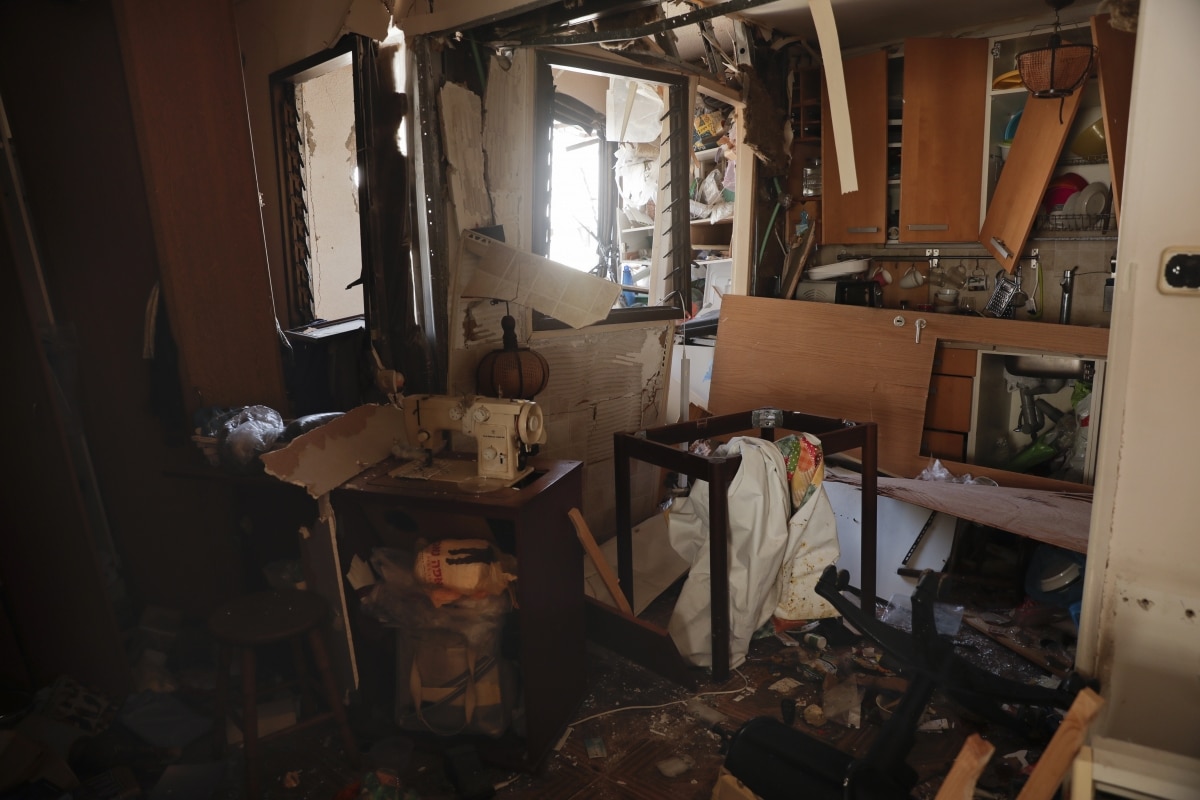 An apartment is damaged after it was hit by a rocket fired from the Gaza Strip, in Ashdod, southern Israel. (AP)

Israel continued its airstrikes into Gaza, leaving behind a massive mound of rebar and concrete slabs in its attack on the six-story building with centers used by the Islamic University and other colleges. Desks, office chairs, books and computer wires could be seen in the debris. Residents sifted through the rubble, searching for their belongings.

Israel warned the building’s residents ahead of time, sending them fleeing into the predawn darkness, and there were no reports of casualties.

“The whole street started running, then destruction, an earthquake,” said Jamal Herzallah, a resident of the area. “This whole area was shaking.”

Since 2012, Hamed al-Ijla had run a training center in the building, teaching first aid, hospital management and other skills to thousands of students.

When the war is over, “I will set up a tent across the street and resume work,” he said. An Israeli artillery unit fires toward targets in Gaza Strip, at the Israeli Gaza border, on Tuesday. (AP)

Heavy fighting broke out May 10 when Gaza’s militant Hamas rulers fired long-range rockets toward Jerusalem in support of Palestinian protests against Israel’s heavy-handed policing of the Al-Aqsa Mosque compound, a flashpoint site sacred to Jews and Muslims, and the threatened eviction of dozens of Palestinian families by Jewish settlers.

At least 213 Palestinians have been killed in airstrikes since, including 61 children and 36 women, with more than 1,440 people wounded, according to the Gaza Health Ministry, which does not break the numbers down into fighters and civilians. Hamas and Islamic Jihad say at least 20 of their fighters have been killed in the fighting, while Israel says the number is at least 160.

Twelve people in Israel, including a 5-year-old boy and a soldier, have been killed in the ongoing rocket attacks.

The fighting is the most intense since a 2014 war between Israel and Hamas, but efforts to halt it have so far stalled. Egyptian mediators are trying to negotiate a cease-fire, but the U.S. has stopped short of demanding an immediate stop to the hostilities and Israel has so far vowed to press on. 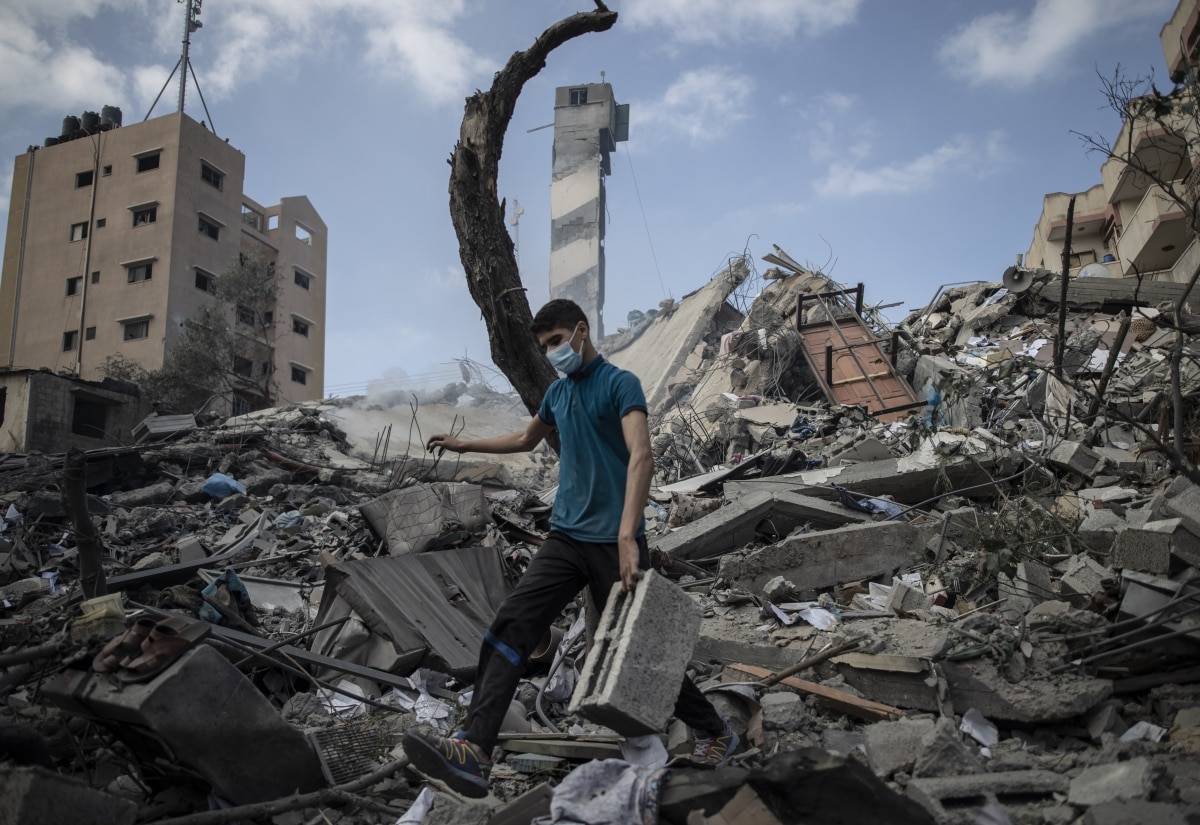 A Palestinian man inspects the damage of a six-story building which was destroyed by an early morning Israeli airstrike, in Gaza City, on Tuesday. (AP)

The war has also seen an unusual outbreak of violence in Israel, with groups of Jewish and Palestinian citizens fighting in the streets and torching vehicles and buildings.

As the fighting drags on, medical supplies, fuel and water are running low in Gaza, which is home to more than 2 million Palestinians and has been under an Israeli-Egyptian blockade since Hamas seized power from rival Palestinian forces in 2007. Nearly 47,000 Palestinians have fled their homes.

Israeli attacks have damaged at least 18 hospitals and clinics and entirely destroyed one health facility, the World Health Organization said in a new report. Nearly half of all essential drugs in the territory have run out.

Essential supplies and aid have only trickled in during the fighting, some from Egypt through the Rafah crossing point it controls and some from Israel when it briefly opened the territory’s main commercial crossing Tuesday before the attack forced it shut.

The WHO said the bombing of key roads, including those leading to the main Shifa Hospital, has hindered the movement of ambulances and supply vehicles in Gaza, which was already struggling to cope with a coronavirus outbreak.

Israel has vowed to press on with its operations, and the United States signaled it would not pressure the two sides for a cease-fire even as President Joe Biden said he supported one.

Israeli Prime Minister Benjamin Netanyahu said the bombardments had set the Palestinian militants back many years.

“I am sure that all our enemies around us see the price we have levied for the aggression against us,” he said, speaking in front of an F-16 fighter jet at an air force base in a video released by his office Tuesday.

The Biden administration has declined so far to publicly criticize Israel’s part in the fighting or send a top-level envoy to the region and has blocked a proposed U.N. Security Council statement calling for an end to the crisis.

Among the buildings that Israeli airstrikes have leveled was the one housing The Associated Press Gaza office and those of other media outlets.

Netanyahu alleged that Hamas military intelligence was operating inside the building. U.S. Secretary of State Antony Blinken said Tuesday that Israel had given the U.S. information about the bombing.

Blinken, speaking from Iceland, declined to characterize the material received. Israel has not publicly provided any evidence of its claim.

AP President Gary Pruitt reiterated the organization’s call for an independent investigation into the attack.

“As we have said, we have no indication of a Hamas presence in the building, nor were we warned of any such possible presence before the airstrike,” he said in a statement. “We do not know what the Israeli evidence shows, and we want to know.”